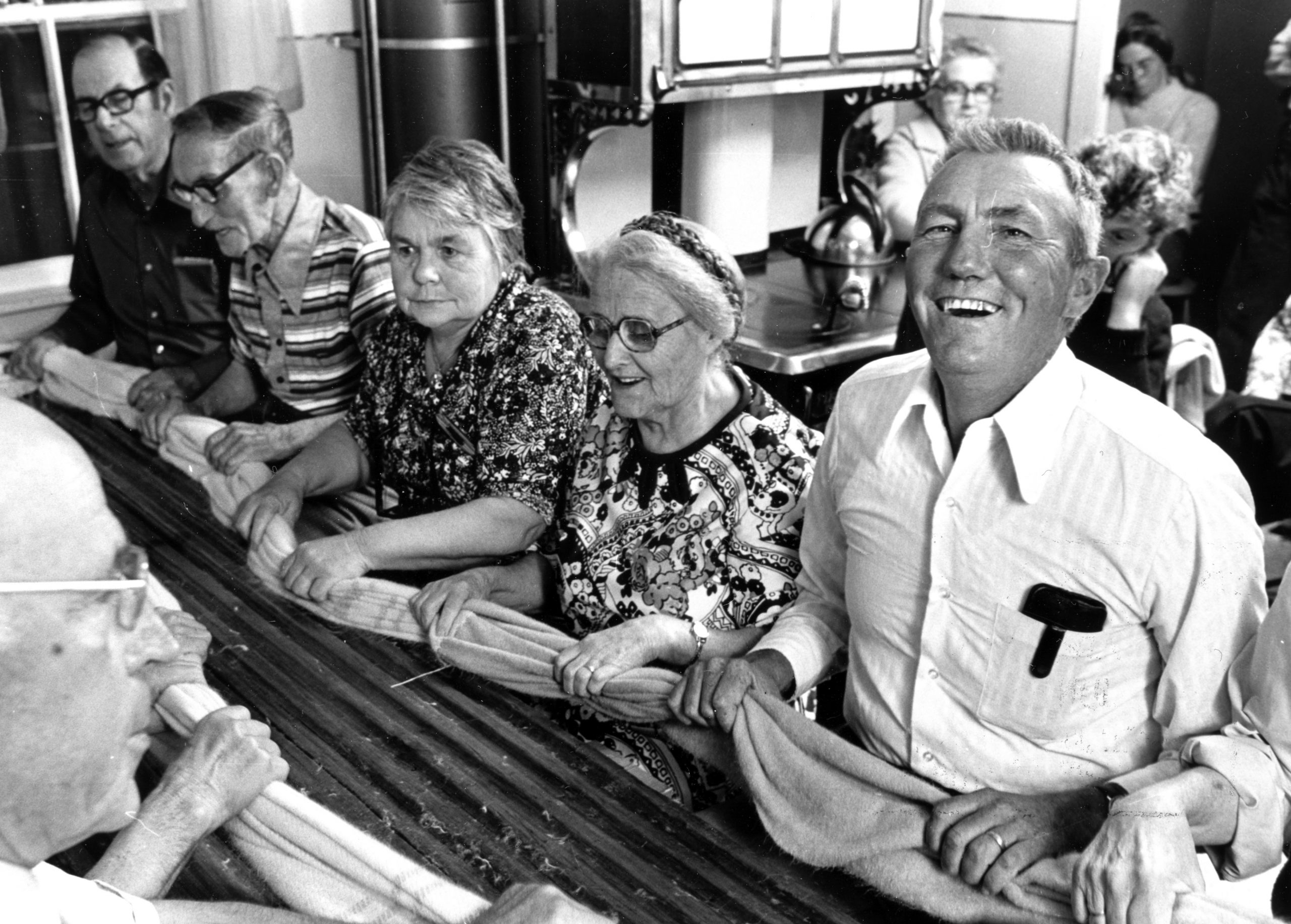 Milling Frolics are social events, having roots in the Scottish Highlands and brought over to Nova Scotia by the Gaels who settled in Cape Breton in the 18th century. Wool cloth that is spun and woven at home is “milled” or “waulked” (British term) at these community events. Milling is basically pounding the cloth, which is wet; it shrinks it make it warmer and more watertight. Nowadays milling is done in factories, but the milling frolic has continued as a social event in Nova Scotia Gaelic communities. Gaelic songs are sung to keep the group in rhythm, pounding the cloth and passing it to their neighbour in a loop. Song is key to the preservation Gaelic culture because it is a method of preserving and passing on language. 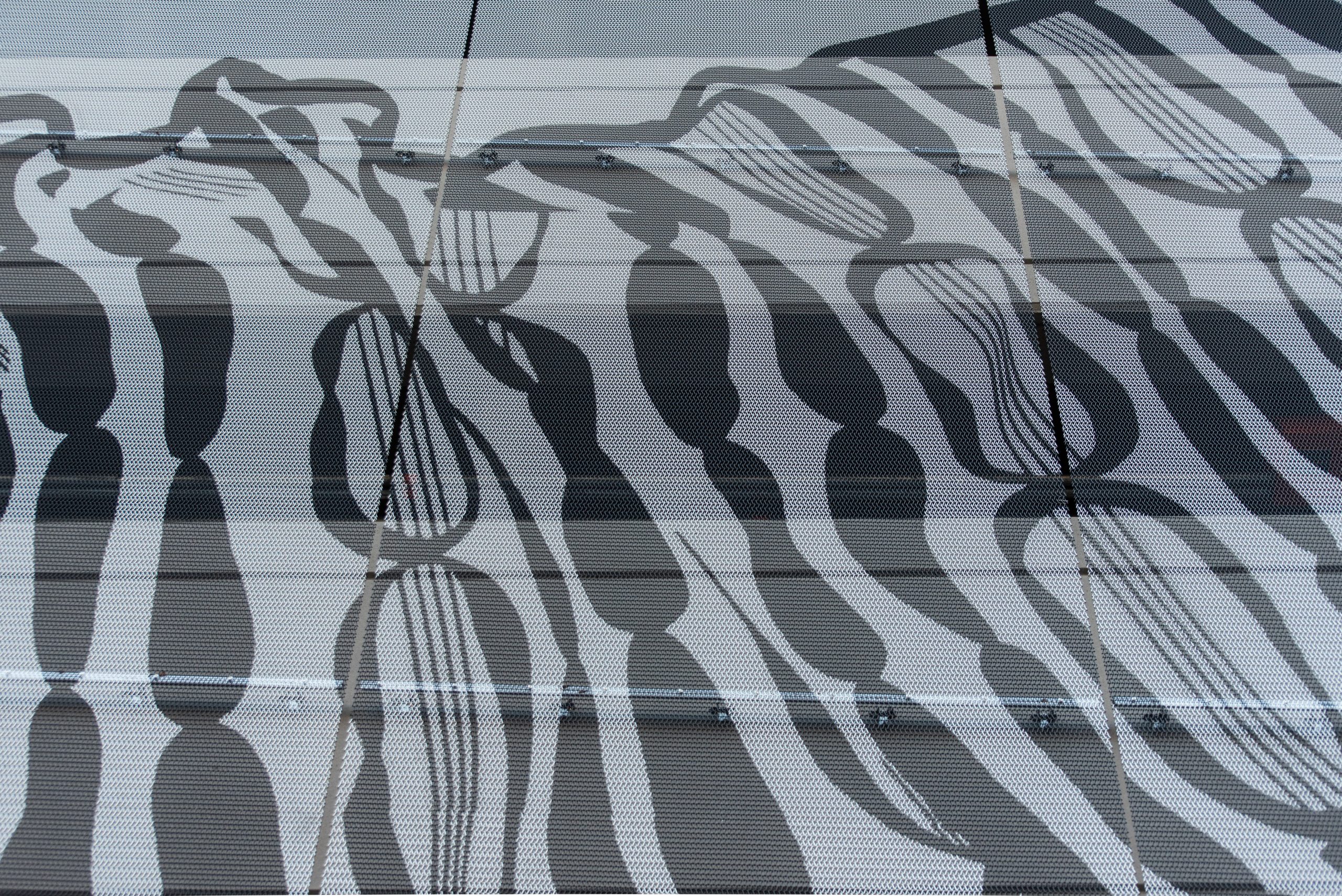 The design on the parkade building represents the loop of woven cloth that is passed around the ridged table during a milling frolic. The repeated vertical lines of organic shapes are derived from the song pattern of leader and chorus, never repeating in exactly in the same way. 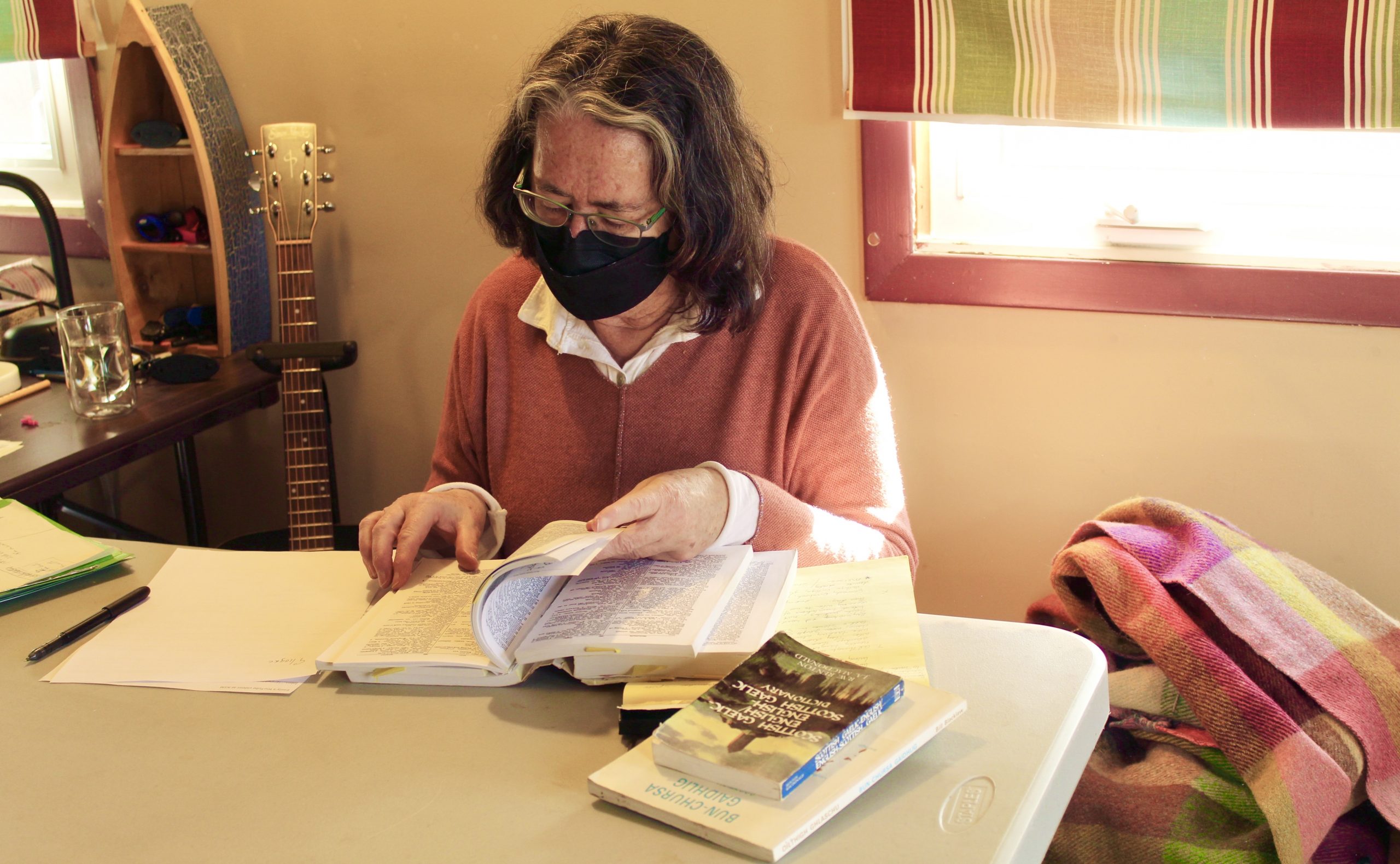 Mary MacLean was the founder of An Cliath Clis, the Halifax-area milling group, and she kept the group running for over 20 years. In her research, Andrea had the opportunity to speak with her about milling frolics in Nova Scotia.

01  Growing up with the Gaelic language

Mary grew up in Gillis Point, Cape Breton, where both sides of her family were native Gaelic speakers. She would hear the language spoken often between her parents, aunts and uncles. Gaelic singing was always around and she enjoyed the rhythm of the songs as a child, but only when she grew up did she show an interest in them.

Mary talks about her relationship with Gaelic milling songs and the founding of An Cliath Clis.

Milling is essentially shrinking the cloth so that it’s wind- and water-resistant. Three things are needed to mill a wool cloth: Liquid, agitation, and a rough surface. Mary talks about the use of urine and the mechanics of milling. The Gaels were superstitious: The cloth would have to be passed around in a clockwise direction and no song verses could be repeated — or else the cloth would be milled unevenly.
The cloth shrinks significantly; for example, a 47-foot by 33 1/2 inch piece would srhink by 3 feet in length and 3″ in width after about 2 hours milling.

Milling songs are a type of work song, providing a rhythm for pounding the cloth in unison. There would be a one-line verse that the leader would sing and then the chorus would be two lines in “nonsense” syllables called vocables. Traditionally, women improvised the songs at the frolic; sometimes they would be as long as 20-30 verses because for the sake of good luck, they could not repeat the verses. The songs would be about clan chiefs, battles, husbands and lovers being away, love and marriage, sailing, and farming. There would be no overarching story, but rather the verses would flit from subject to subject at the whim of the leader.
Mary talks about milling songs, some differences with the songs sung in Cape Breton, and why Cape Breton frolics involve men (unlike the traditions in the Hebrides in Scotland).

Dancing, singing, storytelling, food and drink are all part of the Gaelic milling frolic. It’s a chance to get together and get the news. Mary also speaks about her experience teaching workshops to elementary school kids and how they engage their senses.

Mary shares the meaning of the milling group name “An Cliath Clis” and the difference between gàidhlig and Gaelic. 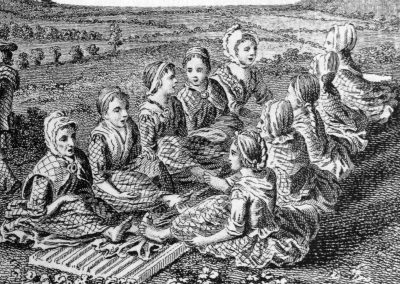 Detail of an 18th century engraving of Scotswomen waulking (fulling or milling) cloth, and singing. Engraving circa 1770; public domain. 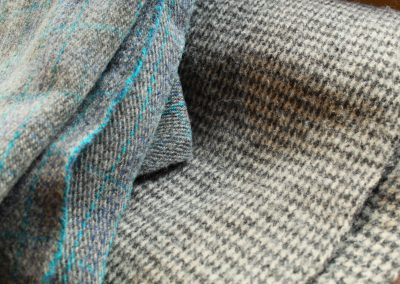 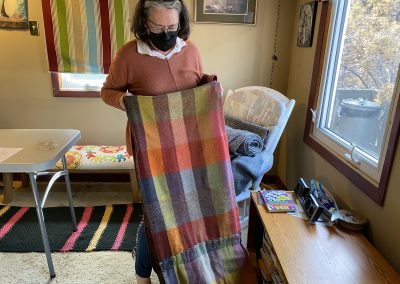 Mary holds up a colourful handwoven cloth with the stitching that holds the milling “loop” in place. 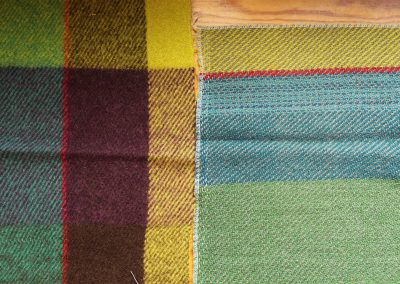 The cloth on the right is unmilled. The yarn weave can be clearly seen. On the left, the cloth has been milled. The yarns are tighter and “fused” together, making it more water and wind resistant.

Mary MacLean granted Andrea permission to tell her story in this way. 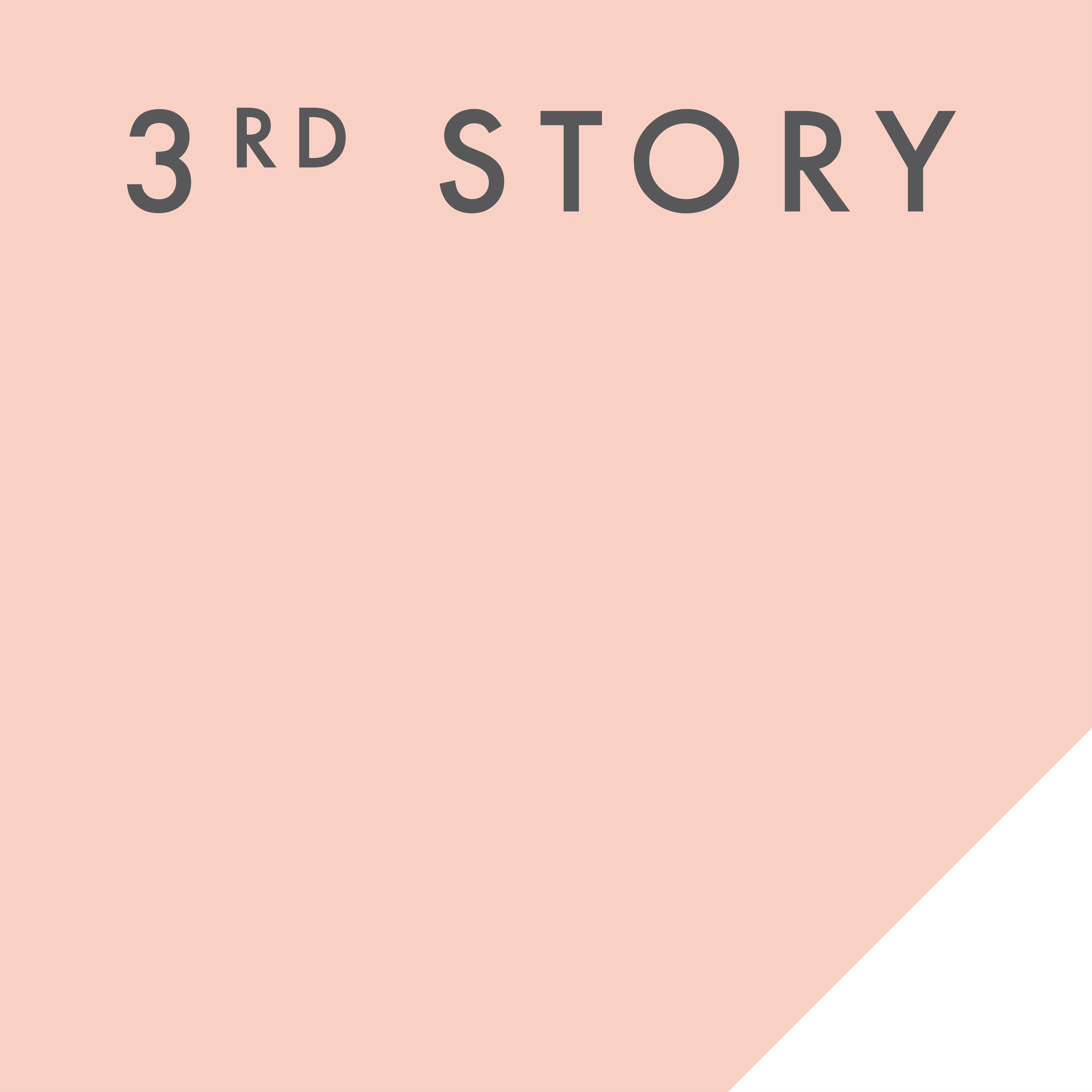 Andrea Tsang Jackson is a Canadian-born visual artist of Chinese descent based in Kjipuktuk / Halifax, Nova Scotia. Her work takes the traditional craft medium of quilting and applies it to a contemporary context.

This project is possible with the participation of many people who offered their time, knowledge, and collaboration.